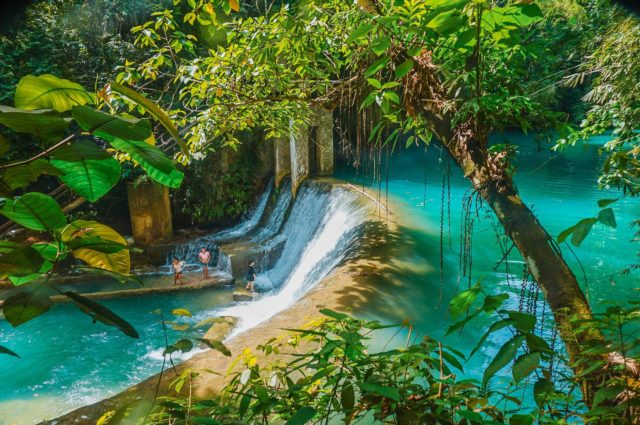 If there’s one place in the Philippines that’s worth a visit, then that would be Cebu. It is found in the Visayan region of the Philippines, and also known as the Queen City of the South.

It’s filled with rich history and culture, it’s also a great place for first-time visitors to enjoy ‒ especially for those who want to embark on a cultural journey.

If it’s an adventure you seek, Cebu won’t be short of activities. Here is a list of must-visit Cebu destinations for first-timers:

The Temple of Leah is Cebu’s version of the Taj Mahal in India, which has been attracting local and foreign tourists alike because of its Greek-inspired architecture.

The temple was built by Teodorico Soriano Adarna in 2012 to show his undying love for his wife of 52 years, Leah Villa Albino-Adarna.

All in all, there are 24 chambers in the temple, which consists of an art gallery, a library, and a museum.

The place also houses his wife’s favorite and personal belongings. Aside from the Greek-inspired architecture, there are also statues of magnificent lions and a winding staircase with brass angels decor.

Coined as the “Little Amsterdam,” you need to head off to the more elevated Busay area and marvel at the beauty of Sirao Flower Garden.

This tourist attraction has a wide array of vibrant celosia flowers in red, orange, yellow, and purple hues making you feel as if you’re in a flower field in Europe. The windmill in the background and the cool wind perfectly complements the scenic views in the area.

Centuries ago, Charles I of Spain asked Ferdinand Magellan to look for the Spice Islands. Through this expedition, Magellan was able to travel the globe and landed in the Philippines. He was able to set foot in Cebu on March 15, 1521.

When Magellan presented Christianity to the Filipinos, most of them embraced this religion. Magellan’s Cross is the site wherein Magellan planted the cross (which symbolizes Christianity). There’s an encasement that protects the original cross of Magellan.

Colon Street is known to be the oldest street in the country. It was Miguel Lopez de Legazpi who first established it in 1565.

He named it after Cristopher Columbus, who’s name is actually Cristobal Colon. Today, the street is where you can buy souvenirs for your loved ones back home. This is also where locals celebrate the famous Sinulog Festival.

Built in 1972, the structure is erected by the Chinese Taoism community and is a place for them to pray and meditate. Eventually, the temple became more and more popular because of its artistic structure.

Non-believers of the Taoist religion can also visit the place. From here, you can see the striking view of the city and even the nearby Mactan Island.

The Tops is about 600 meters above Cebu City and is an ideal spot for anyone who wants to have a good view of the city’s stunning, panoramic skyline.

This place is best visited during sunset, where you can see the Mactan bridge and other neighboring islands. There are cafes and picnic spots in the area as well.

The weather can be chilly during the evenings, so don’t forget to bring a jacket with you!

Visit the revered statuette of the Santo Niño, also known as the child Jesus, at the Basilica Minore del Sto. Niño. The image is a baptismal gift of Magellan to Rajah Humabon and his wife, one of the locals to be first converted and baptized as a Catholic in the island.

Fort San Pedro is quite similar to Manila’s version of Fort Santiago, a bastion fort that’s triangular-shaped, serving as a defense structure of the military in the early 17th century.

This is also the oldest and smallest fort in the Philippines. When visiting the place, you’ll know a little bit more about Cebu’s history, artifacts, and legacies left behind by the Spanish government.

On the Southern part of Cebu is a town called Sibonga, which houses the majestic Simala Church that caters to religious people from all around the world.

The church design is stunning and is inspired by European Cathedrals. Believers pay homage to the huge statue of the Virgin Mary which they believe to be miraculous.

Going south, the Osmeña Peak is known to be the highest peak in Cebu at 1,013 meters above sea level.

Most of it is made up of limestones with sharp, protruding peaks, excellent for taking pictures when you make your way on one of its hills. The primary activities here are hiking and camping.

Some hikers that go to Osmena Peak also traverse to Kawasan Falls. However, you can go there directly via Barili.

The falls’ three-stage cascade of clear waters comes from the springs of the Mantalongon mountain range. Adrenaline junkies can experience canyoneering here.

Blessed with azure waters and pristine white sands, the sandbar of Sumilon Island is an ideal tropical paradise that lures all sorts of travelers.

An overnight stay on the island isn’t allowed, except when you’re staying at Sumilon Bluewater Island Resort.

If you’re heading to the northernmost tip of Cebu, then head off to Bantayan Island, one of the prime tourist destination spots in Cebu.

The island boasts of affordable accommodations and beautiful scenery. You’d enjoy the tranquility of the island and the beautiful waves of the sea.

So there you have it. Those are the must-visit spots in Cebu that are comprised of beautiful attractions and exciting spots waiting to be explored. No wonder it’s a favorite destination among travelers. Just remember to bring the best international carry-on luggage with you for a more convenient, and hassle-free trip.

Adventure in Tokyo: Asakusa beyond the tourist’s view

Things you have to know before moving to Tampa

Things You Should Pack for Your Road Trip

Rewards To Acquiring Made Use Of Campers Available Through Proprietors

The Best Way to Save Money on Rental Cars in Grand...