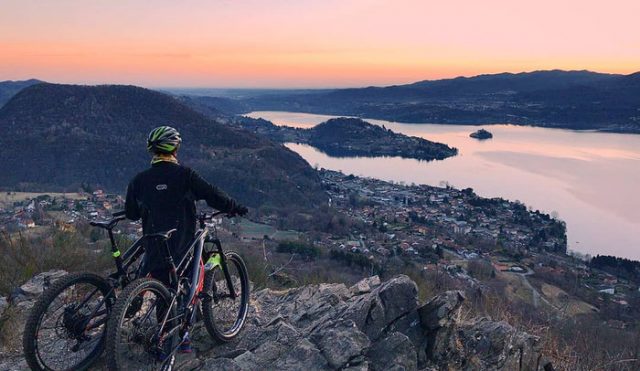 Lake Orta, located in Piedmont, has an engaging beauty that deserves to be experienced also by bicycle. In this way you will have the opportunity to follow its contours and draw its surroundings, stopping to admire its cultural testimonies and the most suggestive panoramas. If a bicycle is an e-bike, the borders can also be widened, the differences in height are less scary and you can really think of taking a day and dedicating it to discovering the territory of Lake Orta: the Italian excellence.

BIKE HOLIDAY THAT AWAKENS THE SENSES

Take advantage during a summer morning to plan your pedal tour. Do it with the soul, and start by enjoying a coffee and a traditional dessert at a wrought iron table of a pastry shop in Pella, an ancient village that inhabits a peninsula overlooking the western side of the lake and dominated by steep granite hills behind . Before the coffee, take a walk in the heart of the town, between the parish church of Sant’Albino and the ancient washhouse in Piazza Ravedoni. Here there has always been plenty of water to be used in the paper mills of the Sonzogno publishing house. Perfect for cycling is the Blue Ring, a path traced by the Lake Orta District and well signposted that follows the circumnavigation of the lake. Equally ad hoc will be the stretch that connects Pella to Orta San Giulio.

If you want to get away from Pella, you can travel 14 kilometers of asphalted roads, dirt roads, some rocky ups and downs to reach Gozzano. Passing through San Maurizio d’Opaglio – historic district of taps – there are coves and real equipped beaches, some also sheltered by pine forests. Meanwhile, you can admire historic villas and architectural experiments, industrial residences that want to sleep on the lake. The more you continue and the more the scenario changes, it becomes almost fluvial. In fact, skirting the lake towards the southernmost tip, one can see more and more dense reeds, which mark the shore alternating with patches of woods.

It will not be a coincidence that Balzac, in a romantic escape on Lake Orta, described the latter with images of “shores now cultivated, now wild: the grandiose and its tumult outside, within human proportions …” . To see all this in a single glance you have to move from the shore to conquer the Torre di Buccione, a medieval keep that today has been equipped with wooden and glass walkways. To go through this landscape with the bike, the climb is about 15 minutes but you can alternatively walk uphill. The view is magnificent for everyone

Get loans quickly from Crawfort

How a traveler can get help from FreshTravelDeals.com in choosing best...

How To Resolve Which Seaside Trip Rental Is Proper For You