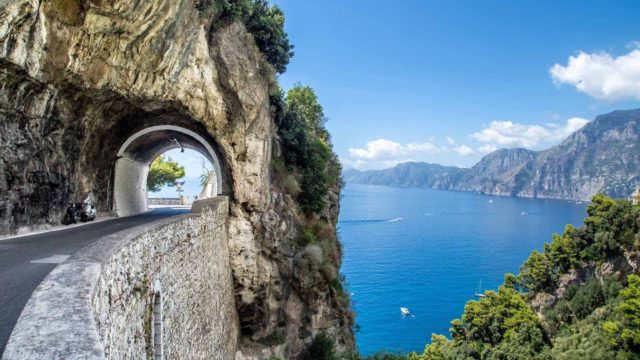 The call by the Italians “Costiera Amalfitana”, is located south of Naples and is a beautiful coastal area whose route runs between lemon trees, impossible roads and beautiful picturesque villages.

This place is famous throughout the world, even though in Spain it is a well-known and not publicized destination in Italy, but its unique natural beauty and the houses of its picturesque little villages, set in a puzle overlooking the sea, make not only that it forms part of the UNESCO World Heritage list, but also for crystal clear waters to navigate by boat.

And is not for less. After several years touring different cities of Italy, it was difficult that there was a part of the Italian geography that left me more impacted than Rome or Venice …

And although I was quite skeptical, after disappointing me with other European destinations of the jet set, such as the French Riviera or the coast of Cascais in Portugal; After the visit, not only has not disappointed me, but also, the Amalfi Coast has earned a place in my heart, forever, and a desire to RETURN, YAAAA !!.

HOW TO MOVE THROUGH THE AMALFI COAST

I never thought I would say this, you know that we love Road Trips, that is: to get to the airport, rent a night and go around the area with the freedom that gives you stopping in each and every moment that you feel like, to take a Photography and contemplation impressed the landscape. Sit on a terrace to have a beer without worrying about schedules, and above all learn about the way of being and culture of the country, like a local.

Although it may seem like a hoax, it is amazing how quickly the character of the inhabitants of a country is known only by the way they drive, the signs of their roads, the economic or expensive roads …

I’m crazy The nova more, would be to go with a convertible to the Telma and Louise … .but in addition to the economic issue (the rent of a convertible triples the cost of the car) tend to angina and hairs to the wind are not the most advisable for a day full of photographs for the memory … Since after these premises, although I advise to rent a motorcycle or a small vehicle, ONE DAY, and be able to feel the experience of traveling the Amalfi Coast, this is essential, you will remove many headaches and save a lot of money, if You go by bus. The roads, are narrow and winding, not in vain is one of the Circuits of the game GT 4 as already ahead in Twiter.

For being politically adequate, Italians do not drive very well … what the fuck! They lead AS THE ASS!  There’s a lot of traffic and a lot of buses, I do not want to think about how that will be in the month of August. There are very few parking lots, and those that are very expensive from four to six euros an hour. And in those parkings, as are each and every one of the crowded cars like the Tetris, the one that charges you gets used to taking care of the car and taking it out, which keeps the key.

Mountains near Colorado Springs: popular peaks to climb at