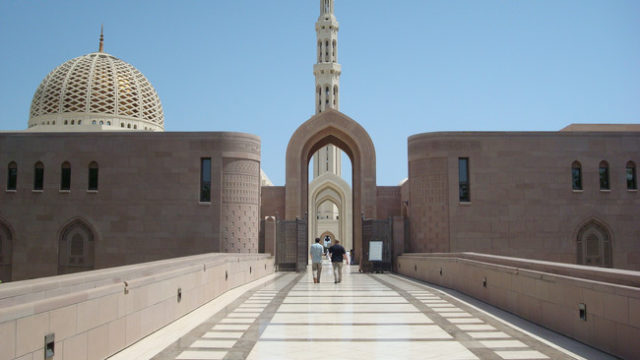 Drive along the Batinah coast to the fishing village of Seeb, which was traditionally the golden suburb of Muscat where the rich merchants had their holiday homes. It is a fishing and market town with a long High Street and an excellent fruit and vegetable souq. On the beach, fishermen haul their daily catch of tuna, mackerel, prawns, sardines and sometimes young sharks, for the daily morning auction.

After a short drive along some fascinating scenery, enter off-road terrain to Wadi Abyadh which means “ White Valley” and is so called because of the formations of calcite mineralised pools visible in the area. Drive through the wadi studded with oleander shrubs, which blossom the whole year through and the hamlets with their old mud houses.

Your journey continues towards the Al Hajjar Range, at the foot of which and guarding a sprawling oasis and extensive date plantations stands the fully restored fort of Nakhl. The imposing fort towers above the town and is an impressive sight, set on a rocky outcrop surrounded by date palms. It consists of concentric fortified areas, each with its own massive door and defensive walls and is considered to be invincible. From the cannon tower the view is breathtaking: over the Nakhl oasis, and towards the pale grey limestone peaks to the east and the low brown rocks to the west.

The hot springs of Al Thowarah on the far side of the village are approached via a narrow winding road through date plantations. The brook runs full of clear spring water, the source of which is the clefts in the mountainside. The water temperature is about 40 degrees centigrade and is warm and soothing. Take the dirt road to Wadi Sahtin with its ravines, rivulets, palm groves and tiny settlements.

A steep and narrow road takes you to the village of Wajma, 1600 meters above sea level and almost hidden by palm trees. Spread out beneath is its neat terraced fields. Once down in the valley you drive through Wadi Bani Auf, an ancient wadi offering breathtaking vistas along its 26-kilometre trail surrounded by high mountain walls. A little gap in the mountains, barely discernible from the main road, reveals the entrance to the wadi, which cuts a swathe deep into the mountainous terrain. Sweet lime, banana and fodder are also grown here. Because of its location at the bottom of a gorge, sunrise is almost three hours late over the wadi.

Your last stop for the day is at the square fort of Al Hazm with its ancient cannons watching over the surrounding Batinah plains. The fort is famed for its enormous carved and brass studded doors. The arches and pillars inside and the intricate carvings of doors and pillars make this a graceful though functional building.

Look For Inexpensive Journey Offers Whereas Shopping for a Flight Ticket

How to manage credit more effectively