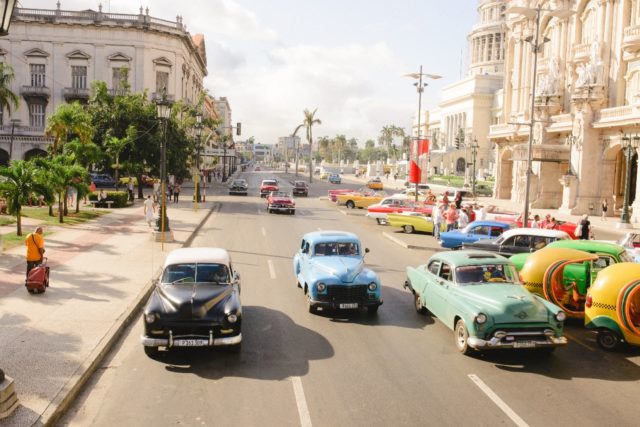 500 years of colonial history, decades of communist rule, and the fact Cuba is the largest nation in the Caribbean means there are an almost endless number of potential destinations worth visiting. With the limited time a vacation provides, how do you decide where to go on the island? You could spend hours scouring everything that’s ever been written about the island on the internet, or you could read on and discover the six places you need to check out in Cuba!

Without a doubt the jewel in the country’s crown, Habana Vieja, or Old Havana, is a must-see for any visitor to Cuba. The beating heart of the Cuban capital, this downtown area has played an important part in the history of not just the capital but the whole nation. Demarked by the position of the city’s thick defensive walls, the entire area is a UNESCO-listed World Heritage Site full to brimming with Spanish-era plazas and narrow streets home to baroque and neoclassical architectural wonders such as the Gran Teatro. Don’t miss Plaza Vieja and Plaza de Armas among others for a sense for what makes the area tick, while great views of Habana Vieja can be obtained from the rooftop bar of the monolithic Hotel Nacional.

Incorporating some of the country’s most important periods of more recent history is the Bay of Pigs. Although its name may be a little off-putting to the bay’s first-time visitors, it is actually a place of astounding natural beauty. Palm trees caste shade onto the pristine white arc of sands of the beach at Playa Girón on the eastern side of the bay, where the turquoise waters are renowned as a fine swimming and snorkelling spot. But the bay was also the 1961 landing site for the failed counter-invasion by Cuban exiles and backed by the CIA that was meant to rest Castro from power. A museum here tells the story.

The small, traditional township of Vinales lies a few hours west by road from Havana in Pinar del Rio Province. As the historic centre of Cuba’s all-important tobacco production, there are plenty of things to do in Vinales, while the single storey wooden homes with exterior porches that make up much of the town are as photogenic as any of the capital’s buildings. Ringed by lush countryside interspersed with bare rock formations with sheer faces known as magotes, there’s also plenty of opportunity to enjoy another side of Cuba on foot or by renting a bike. As you explore, make sure you take in the caves of the Museo Paleontológico Palenque, and absorb the scents that come with the growing and drying of tobacco.

While not all tours make a stop at Cienfuegos, we think this city is definitely worth seeing up close. After all, it can’t have been called the ‘Pearl of the South’, and the ‘Paris of the Caribbean’ for nothing! One of Cuba’s younger cities, dating back to its foundation by Don Luis de Clouet in just 1819, Cienfuegos is like no other Cuban conurbation. But that’s not simply because of its relative youth. The city was largely settled by French immigrants, rather than Spanish colonists, who came to the island from the French territories of North America as well as the mother country. As a result, its wide boulevards, parks, and the architectural style of many of its buildings owes more to France than Spain.

Founded almost exactly three hundred years before Cienfuegos in 1514, the city of Trinidad is situated on Cuba’s southern coastline east of Havana. Another of the country’s UNESCO-enshrined World Heritage Sites – Cuba has more than any other Caribbean nation – Trinidad is often described as a living museum, with good reason. Many of the city’s riches come from its role as the capital of the country’s sugar cane industry, with several important points of interest dating from this period. Just outside of the city you’ll find the Valle de los ingenious, or the Valley of the Sugar Mills, for instance. It contains both ruined and intact mills such as Manaca Iznaga, where the plantation house, barracones (slave quarters) and 45 metre tall Iznaga Tower all remain.

Located in the eastern hinterlands of the island, Santiago de Cuba is one of the original seven settlements founded by the Spanish during their initial colonisation of the island. The country’s second largest city, it is widely-regarded as its most diverse too, with populations that can trace their ancestry to not only Spain and the country’s indigenous tribespeople, but also West Africa, France, and even Britain. It makes Santiago the best place on the island to explore the origins of the santeria religion, which blends aspects of Roman Catholicism from Spain and traditional faith practices of West Africa. More recently, the balcony of Santiago’s city hall was the site at which Fidel Castro declared his communist uprising a success in the late 1950s.

If you’ve been considering Cuba as a potential vacation destination but were never quite sure where to spend your time, now you do! Of all the possible places to visit, we think these six we’ve highlighted are absolute musts!

The 5 Best Countries for Solo Travel

Speaking a foreign language changes how our brain works

Tricks to Planning Your Honeymoon on a Funds