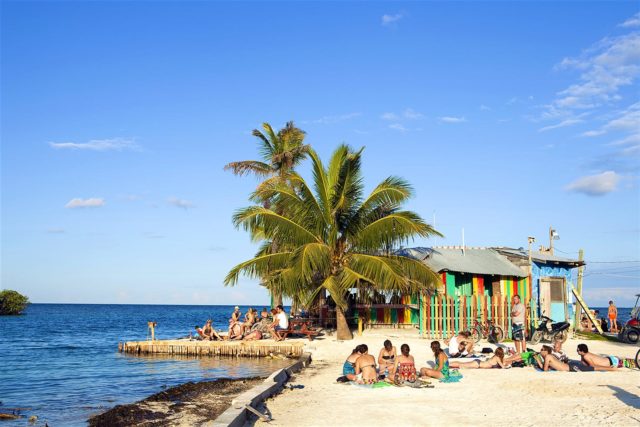 Located in Central America with Mexico to the North and Guatemala to the south, Belize is often overlooked from many travel itineraries. But it really shouldn’t be! This country is home to breathtaking coastlines, mystic Mayan ruins, spectacular wildlife and the largest barrier reef in the western hemisphere. In this article, MyBaggage.com look at 8 reasons why you need to travel to this beautiful country.

If you want to explore Mayan ruins without the crowds, then Belize is the place to be. Belize was the cradle of Mayan Civilization and boasts more ruins than any other country and you don’t have to go far to stumble across them. A few are even accessible from the main roads, such as Xuantunich and Lamani. The biggest Mayan Ruin is Caracol, which was even more prominent and impressive than Tikal in Guatemala. Belize’s Mayan sites are much less visited than the likes of Chichen Itza or Tikal. Arrive early in the morning for the chance to experience them without anyone else and feel like a real-life Indiana Jones!

English is the national language

Belize is the only country in Central or South America that has English as its national language. This is helpful for anyone who is looking to dip their toe in exploring Latin America but who hasn’t got experience with the lingo. That won’t be a problem here! Belize represents a variety of cultures, with many different ethnic groups calling this country home. Mestizo, Maya, Garifuna, Creole and Mennonites all live in Belize, making it an incredibly unique culture that is open and welcoming to different ethnicities and religions.

Only 350,000 people call Belize home. The country is underdeveloped and has little industrial industry which has made it a safe haven for its wildlife. There is plenty of lush, tropical rainforest and the government and people have put measures in place to protect this and invest in ecotourism. A perfect example of this is the creation of the world’s first Jaguar reserve that covers 128,000 acres of rainforest and gives this endangered big cat a place to call home. There are also plenty of animal sanctuaries where you can volunteer or see conservation efforts firsthand. The Baboon Sanctuary is a firm favourite and allows you to learn about these animals and the threats they face. Throughout your stay in Belize, you can expect to see plenty of birds, the country is home to over 600 species with toucans and macaws being the most commonly spotted, so remember to keep your eyes peeled!

Belize boasts some of the best diving and snorkelling sites in the world. The most famous is the great blue hole, which is a 124m sinkhole that can be seen from space. This natural wonder offers divers a unique experience to dive into one of the biggest coral reefs in the world. It has been exceptionally preserved and is teeming with sharks, stingrays and turtles. Belize is also a popular spot for anyone who is looking to get their PADI diving certificate. There are plenty of diving schools to choose from and the most popular destinations to train is on the Cayes and Atolls. As Belize is often an overlooked location, PADI costs here are relatively cheaper than more expensive locations in Mexico or other South American countries.

The cayes and atolls

Did you know that in Belize you can rent your own island for the night? The country is home to over 200 cayes or atolls, many which you can visit or even stay on. The largest and most popular island is Ambergris Caye, which is most known for offering exceptional diving and snorkelling opportunities. You can explore the reef of the great blue hole and take a detour to the Hol Chan Marine Reserve which is known for its abundance of sharks and stingrays. A true tropical paradise!

Belize is home to one of the most daring Mayan ruin adventures. In San Ignacio, near the Guatemalan border, you can explore Actun Tunichil Macknun Cave, a Mayan ruin that is located in an underwater cave. You have to swim, climb and trek your way to the ruin, which is located deep within the cave and is home to the skeletons of ancient Mayan warriors. This is the only underground cave tomb of the Maya in the world.

Travelling around is easy

Belize is a small country which makes it incredibly easy to travel around. Tourists often rent a car and create their own itinerary, with a week more than enough time to see the best sites in the country. Just prepare for some bumpy roads!

If driving isn’t your thing you can also rely on Belize’s public buses. There is a comprehensive network that efficiently serves much of the country. Prices are fixed and the schedules are regular, all start off at Belize City and then go either North, South or West out from the capital. Because of the small size of the country, you know that getting from a to b isn’t going to take hours, so won’t lose valuable time travelling.

Belize isn’t well known for its cuisine, but that doesn’t mean it isn’t satisfying. With so many cultures calling Belize home, there is an eclectic mix of meals that will appeal to any taste. Being a coastal country, you can expect to be in seafood heaven. Think shrimp, seabass, fish fillet and even swordfish! If you are a fan of lobster bear in mind that due to government restrictions in order to prevent overfishing, it can only be eaten in restaurants from June to February. Belize is also the king of fruit, you’ll not have to worry about getting your five a day here. Choose from kiwis, mango, papaya, watermelon and pineapples. Belize is a major exporter of oranges and grapefruits also, so if these are your favourite you’ll have plenty of fresh produce to choose from!

We Needed To Attract Consideration To Boat Rentals Miami

A perfect yacht for the best experience

The advantages of traveling by plane and how to organize it

How To Resolve Which Seaside Trip Rental Is Proper For You

Easy Ways to Make Getting to Your Holiday Spot Fun